I vividly remember the turquoise-colored table globe spinning, my sister and I hovering our tiny skinny fingers over it until the rotation stopped and they landed on a country. I loved learning their names, but most of all, I loved to imagine myself exploring those faraway lands, so exotic, so unreachable. We would then grab scissors, glue, a stack of mom’s fashion magazines and meticulously look for models with outfits that represented the countries of our spin the globe game. Once we found the perfect ensemble, we would bond the images to a notebook and with colorful cursive letters write the location and occasion. In my imaginary “Summer afternoon in Valencia, Spain” I was a gorgeous lady wearing a beautifully embroidered white skirt, a matching top and a straw hat. In real life I was seven, eight years old. I didn’t know back then that this game was a vision board for what would occur almost four decades later.

I hardly traveled as a child. In the small northeastern Brazilian town where I grew up in the 1980s, when yearly inflation hit as high as 215%, both of my parents worked three shifts to give their kids a taste of middle-class life, but there was no discretionary income for trips. In the rare occasions when we traveled, I remember the excitement of packing a suitcase a week before vacation started. I could hardly sleep from pure anxiety anticipating the magical moment that I would step into that car, seat in that bus, fly in that plane. The road was my alter ego, my aim, a reflection of all that was good and possible.

I learned from a past life psychic that your destiny is not a secret, that who you are is who you are meant to be. This thirst to see and embrace the world has been there all along as part of my earliest memories, a guiding force for some of the biggest decisions of my life, from education to career, from hobbies to relationships. I started taking private English lessons when I was 11, had an American pen pal in the pre-Internet era of my early teens, and at age 16 I left my native country to spend a year as an exchange student in rural Iowa. I became fluent in Spanish. I studied French. I chose to work in multinationals so I could be exposed to a community of worldly professionals and have a chance to travel on business. I took vacations abroad, the physics of time and space nonexistent as I spent hours in blissful flow planning each moment. My friendship and romantic radar would instantaneously send electromagnetic waves to globe trotters and foreigners.  I became a U.S. citizen.

And yet, I knew that there was still a chapter waiting to be written. I wanted so badly to experience the thrill of being a backpacker roaming towards adventure, hopping from planes to boats and buses for the simple joy of exploring, of listening to the musicality of foreign languages, of savoring the scent of spice, the bubbly sounds of street markets, the engaging life stories, the wheel of history. I wanted all of that without the limitation of time. There was never enough money, never enough time. There was always a universe of excuses and way too much fear. I tried it in my 20s and my apartment literally burned down. I tried it in my 30s but self-sabotaged those dreams by buying a home and laying anchors.  My hunger for freedom came with equal loads of desire for security. Then in my 40s the coronavirus pandemic joined forces with a major restructure in my workplace. I wondered: "what if I'm let go? What if this unprovoked life event is the universe giving me the opportunity to step into my dream?"  After 18 months of quarentene and torment waiting for the process to unfold, I learned that I would be laid off. And there it was: the fragility of the collective human species facing mortality; my shattered ego; a cliché mid-life crisis;  loads of self-help books, podcasts and soul-searching, spiritual practices; the realization that I was living an outdated life script. What's all of that but the recipe to manifest long-desired dreams?

Three weeks before I was set to leave the company in September 2021, I was offered a temporary six-month role. Something in my body felt right: "take it, this feels good." By then, I had already decided that I would only say yes to what felt great in my gut. While I accepted it, I was also widely aware that my cluttered mind still feared the road less traveled (oh, the irony of the expression!). There were loud voices in my head and from loved ones reverberating that this was a crazy romantic delusion ("How can you leave a well-paying job to live something so adolescent and in the midst of pandemic? How can I leave a caring manager and team that root for my professional success? What kind of spouse am I to leave my home for months at a time? Is this coming from a place of self-love or childish defiance?"). I hired a career break coach who gave me tools for greater introspection. Then the miracles happened: in less than three months of soul inventory homework, journaling, meditation and counseling, I stopped being afraid. I bought my plane ticket. When later my company offered me the opportunity to remain employed, I politely declined it and chose the severance package instead. After months resisting it, my husband finally supported my decision to leave my job to travel, though by that time I had already decided for myself. The only permission I needed was from me and me only. Nothing could make me change my mind, not even a major surgery that I suddenly had to endure only 4 weeks before I was set to travel.

I now know deep in my heart that exploring the world and embarking on this adventure is part of my life’s purpose, a gift to honor my inner child and a bridge to something new, even if the future remains uncertain. Now here I am, deeply aware of my privilege, staring emotionally, joyfully and yes, a bit frightened, at the eyes of my dream.  I'm mere hours away from stepping into that plane to fly through clouds and oceans and continents and blend with the road abroad, its powerful magnetic field latched on to my aura, soulmates that we are. I'm an irreversible romantic. 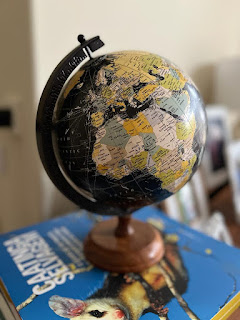 P.S.: I spun the globe and my adult fingers landed in Lisbon, Portugal.  On and onwards to the land of my ancestral language, to the old seafarer empire of voyages that shaped the planet, including my native Brazil. "Navegar é preciso, viver não é preciso," I learned from the great Portuguese writer Fernando Pessoa, though the expression dates back to Roman antiquity.  "To sail is precise/necessary, living is imprecise/inaccurate/not necessary," the several interpretations of "preciso" bursting like shrapnels of poetic beauty in my brain.  In my playlist, the marvelous fado of same title by illustrious Brazilian composer Caetano Veloso.