The cat and the road 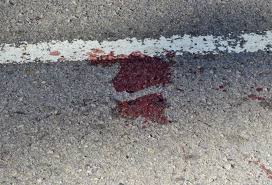 If I had arrived three minutes earlier, I would have seen the exact moment that the murderous car took the life of the majestic feline on the intersection of old Houston and gentrification. I still don’t know what I would have done: would I have chased it? Would I let it go free from impunity and guilt?

The blood was still fresh and warm. An eyeball was completely removed from the eye socket.  His jaw was wide open, frozen in a scream of terror with his little sharp teeth echoing the shapes of the downtown Houston buildings in the backdrop. The cat, tabby and gray, looked exactly like mine and this thought brought shivers to my spine. I parked my car in front of the crime scene. A man with his name written on his baby blue shirt holding a bottle of Coors Light stood still looking at the corpse. It was so fresh its soul still hadn’t had time to process it moved to a different realm of existence. I rolled down my window. “Is it still alive by any chance?” was the first question that came out of my mouth, so disappointedly inappropriate. Shock was all I could see on that handsome face that framed stunning blue eyes. “That was my cat,” he said with a sight of disbelief. And shaking his head, he burst it out with the strange slow motion cadence that comes out of horror: “Those motherfuckers…they killed my cat.” I stood silent for a moment and then asked if I could help him remove the animal from the road. All he could say without ever letting go of my pupils was “those motherfuckers…those motherfuckers killed my cat.” I said I was sorry for his loss, rolled up my windows and drove back home, shaken by the whole experience. There was no opportunity for an 8th life that night.

There were too many vivid colors in that horrifying scene: the gruesome red of the blood, the shining black of the asphalt, the infinite blue of those suffering eyes and the uncertain gray of me not knowing exactly what to say or what to do. And yet, more vivid than any memory or color, was the absence of the embrace I should have given that man when he most needed it.