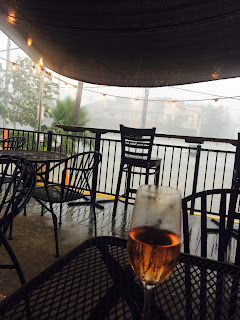 This is the story of how this author met her husband, written within a couple of days of their first date

She woke up that morning with a residual taste of last night’s Alaskan Ale mixed with junk food and a sense of duty: “I must break a sweat to purge that excess of lard out of my system.” Oh, those evasive thoughts, gone in an instant when she picked up her phone and looked at the text message that came in at around 12:30 a.m.: “Do you like fried chicken?” No man had ever asked her that question. Somehow the world felt very light for a moment. Who needs a workout when you can have fried chicken with champagne for lunch with a sweet, nerdy-looking man at a pretentious place that calls itself a “wine dive”?

She took the morning for herself, a morning of spur of the moment, no-obligation type activities. Life was becoming too consumed with them both at work and her personal life. The sense of being trapped in her own freedom was extrapolating the barriers of normality. That morning she did what she normally does on Saturday mornings: fed the cat, grilled a toast, fried an egg, brewed some coffee. These small little tasks were meditative in nature: the goal was kitty’s thankful face, a bread’s perfect brown, a yolk’s semi-soft texture, coffee that is never bitter, just like souls should be. Simple, here, now. Nothing before, nothing after: the present in its absolute state and form. She picked up her computer to write about things that inspired her. She chose a different music station in Pandora. Van Morrison felt right. And when the time came to star that red dress she bought on a trip to the Southern hemisphere earlier that year, she was ready.

“I’ll take a dry sparkling rosé from California,” she ordered from a seat at the bar. Ten minutes later he walked in, black framed glasses over his small brown eyes, thick salt and pepper curls that matched a smooth light olive complexion. There was no awkwardness in that second encounter, considering that the first one the night before had lasted no more than 10 minutes when the music was too loud and the crowd was boozy (by his recollection, that first encounter lasted 30 minutes and he bought her a beer). Conversations just happened to flow like an ever-ending thread of stories, memories, laughter and the collection of unspoken signals sent to impress and attract. And yet, she wasn’t trying too hard. She was too exhausted of trying too hard. The dating scene was brutal and had gotten old too quickly. It was time to change tactics, to go back to the basics: be as authentic as possible, hold nothing, start from a place of simplicity, like fried chicken.

He told her stories of his childhood growing up in the mountains and seemed both proud and confused about his Native American origins. He grew up in a time when you were supposed to hide such facts. He was an avid basketball enthusiast and player despite his small frame. In his teen years, he had a sweet spot for blondes. She liked tall men, but the short one in front of her seemed bigger and taller than so many that had recently crossed her path. And she really, really liked that Cindy Crawford kind of mole on his left cheek. He seemed impressed by her travel tales. His gentle voice calmed her normally hyper-self. He was definitely a type-B and that was quite a different space for her. And just like that, in between bites of a fried bird with chipotle honey, four hours went by until the skies turned pitch dark and the rain started to pour in an attempt to compete with their outpour of unscripted words. They were trapped in a flooded neighborhood, nowhere to go other than possibly the covered patio to watch the storm engulf the city, thunder and lightening cutting through the skies and shaking the champagne glass flutes they held in their hands.

When the waters started to recede, he invited her to his house. She invited him to hers. And in separate cars on the way to somewhere another torrential body of water made its way to Earth and they were caught in the middle of the deluge, both water and adrenaline raising fast while they drove. “Turn around right now” he commanded over the phone. “Follow me to that parking lot,” she decreed. A few moments later and they were able to valet their way to safety.  It was almost dinner time and that pizza place just around the corner seemed like the perfect storm shelter. Rain bypassed the umbrella he carried. They were soaked, but they really didn’t care, each moment wholeheartedly improvised. They drank wine, shared a pizza and played an interrogation game to get to know each other better while the streets of Midtown Houston were submersed in some kind of wet spell.

They managed to arrive safely at his place, a comfortable townhome impeccably clean and decorated in the most traditional masculine bachelor style. She wasn’t a fan of the heavy curtains, the dark furniture, the lack of paintings on the walls. His decoration was beyond plain, so unlike the mind that charmed her that afternoon. She secretly laughed at her unspoken criticisms, but at that moment she chose to gave them up on the spot. She also opened the door for any sort of self-inflicted judgment to wash away with the rain. Her mind was clear. Her soul was light. With all traces of residual resistance out of the way, she surrendered to what felt completely natural. That night she was reminded of beauty, of tenderness, of lightness. It was a place of discovery and exploration. And when the morning came and he treated her to a cup of coffee that lasted through the early afternoon hours, she realized that milestones can happen in a 24-hour window. Hers was mindfulness. Nothing ahead, nothing to plan, expect or survive. It was just softness of spirit. She had gone back to the basics. Life was simple and festive like fried chicken with a flute of champagne under the stormy neon skies.